My latest article for the Orange County Record. 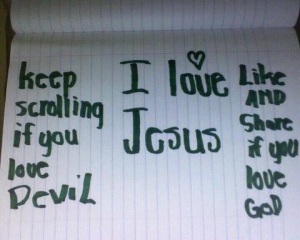 Facebook is one of the most popular websites to date with nearly 500 million users from all over the world.  From its humble beginnings in the dorm room of Harvard University, Facebook is now everywhere.  From your personal computer to your Smartphone, one is never too far away from social “interactions” found within Facebook (or as a friend of my calls it ‘faceless book’).

Facebook connects us to the world around us and we are able to share things from vacation pictures to memorial pages for those who have died.  Facebook at its core is a social networking site, connecting people across various socio-economic statuses, education levels and even religions.  Facebook in my opinion has moved past its original intent of just social networking between friends.  Businesses, churches, civil groups, clubs and even TV shows all have a presence on Facebook.  Breaking news is reported, shared, liked and commented on, all within the confines of one website.  The goal has moved from friendly conversations to specific advertisements and mass information around like issues, causes and beliefs.

What does Facebook do or has done for Christianity?  Has Facebook helped or hurt the gospel message?  Recently I began to see more and more pictures shared that read “Like if you Love Jesus” or “Keep scrolling if you love the Devil, like if you love God.”  If you are a user of Facebook like I am, you have more than likely seen these pictures (or others like it) before.  These pictures call for Christians around the world to share their faith boldly and proudly on their Facebook page so that all who may grace it will know that they are a follower of Christ.

To be honest, I can’t stand them.   They clutter my news feed and are not the reason I get on Facebook.

I do not like them for a number of reasons.  First, it makes Christianity something to do, not something that is done.  Followers of Christ are called to continue the message of Christ in the world around them.  Often in churches there are talks of “letting your light shine before others,” but there is also a warning about doing things just to get attention in the name of faith.  Does it really mean I am “less of a Christian” if I decided not to click the ‘like’ button on a picture?  Does this mean that I have sold my soul to the internet Devil because I am too consumed with posting pictures of my children?  Absolutely not.  Its one thing to have a faith and have that faith inform your life, but it is another to have a faith and guilt trip others into following your actions.  Christ did not call for us to plaster our faith across the internet.  Christ calls us to be the presence of God at all times, in all places and to all people.  A person’s faith or commitment to God/Christ is not contingent on whether or not they share a Facebook photo with their friends.

Facebook and other social media outlets like it have made the gospel a bumper sticker, for good or for ill.  Since the interaction happens in cyber space the relational connection is lessened.  Because of this the scriptures, quotations, theology and sermons can all be taken out of context and promoted as truth with little or no dialogue, conversation or explanation.  Of course this can happen anywhere, but for some reason the internet has brought this to the forefront.  Is this the 21st century model of evangelism?   I sure hope not.  Social media has it place in the propagation of the gospel, but evangelism at its core is grounded in relationships.  Evangelism is a scary word for some people because they believe it means inviting people to church or knocking on people’s doors and passing out ‘salvation tracts.’  While some people believe this is the best way to promote ones faith, I believe that being in a relationship with someone first helps to “open the door” to evangelism.  One does not even have to speak the name of Jesus Christ to get the message of Christ across.  This is what Facebook and these “like if you love Jesus” pictures fail at doing; there is no relationship, just a pretty picture with a cute font.  The gospel demands more than that.