I know that it has been a while since I have given you an update about the book.  Thank you for patience!

Here is where we stand.

Today, I received the “marked up” copy edited version of my manuscript.  I will be reviewing it and answering some questions about the text this week.  The draft will then be sent back to the publisher for type setting.

After type setting the copy will be sent back to me for one more review and then off to printing.

As of right now the working title has changed to “Seeking Imperfection: Body Image, Marketing and God.”

I am thankful for all of your support and look forward to what the future holds.  It will be a fun next couple of months and I want you to come along for the ride.

Be sure to fill out the form below to have all future blog posts sent to you via email.  Also please please please be sure to follow me on Twitter @RevEvanDolive and on Facebook at FB.com/evandoliveauthor for even more updates!

As you might have noticed, evandolive.com has received a face lift.  When I started this site nearly three years ago I kept the same theme and layout.  It was functional but over time I wanted to “freshen up” the site and streamline some of the pages (i.e.- Social media tabs, speaking requests/sermons together, etc) and links.  I have been going back and forth between various themes offered by WordPress but none of them were what I was looking for.

Thanks to the help of my devoted soon to be graphic designer sister, Haley, evandolive.com has a new look.

So take a look around and let me know what you think!

And to again say thanks to my sister here is a picture of us at the Stephen F. Austin/Sam Houston State Football game. 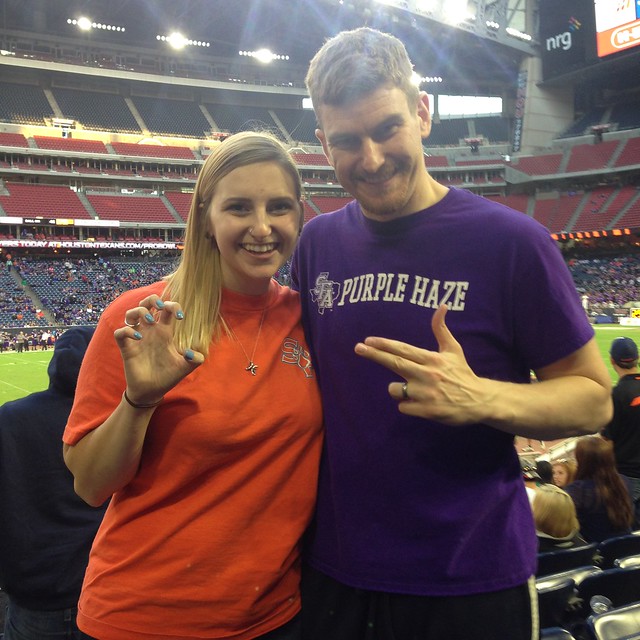 It’s hard to believe that seven months ago I clicked “publish” to a letter asking a multi-million dollar corporation to stop targeting women and girls in a way that diminished their self-worth, self-pride and self-esteem.   Little did I know that 3,936,266 hits (and counting) later people from across the globe would still be reading, sharing, liking and discussing it.

I want to thank you all for supporting me.

Throughout these past few months I began to think about what the next step would be, I did not want the conversation to stop with one post.  I began to think about how throughout most marketing advertisements the human form or the Divine Image (Imago Dei) is distorted to a form of perfection, ideal and glamour.  Sure ad campaigns use this clever device to sell products but the problem arise when these images go past the screen/page and into the minds of people as factual and true.

I am happy to announce that yesterday I have submitted a book proposal to Chalice Press.

In a nutshell, it looks at how the divine image is distorted in marketing and how God uses imperfect people to propagate the message of God while society demands perfection.

Now this does not mean that they will pick it up or anything but I am proud of the work I submitted.

There was one constant this week at work while I visited patients– and no, it wasn’t the fact that people mistaken me as a Doctor or a Nurse.  This week over 50% of the rooms I entered had the George Zimmerman trial on the TV.  CNN, MSNBC and other major news outlets have been running what seems like 24 hours coverage of courtroom drama; the lead story for most of the news stations and more than likely on talk radio (on both sides of the aisle) has been a run down of the evidence, the objections and word for word break down for the testimony given.  Social media has been flooded with hashtags, posts, reflections and petitions for both Trayvon and George Zimmerman.

Talking heads and media commentators have weighed the evidence and tried to ascertain what verdict the all female jury will return with.  They have debated the use of “cracker” as a derogatory word and have talked ad nauseum, often in circles, about this case.  At times, it can be too much to handle or absorb.

But through it all, there is one piece of information, in my opinion, that the ratings-hungry news organizations have missed or overlooked; whether the jury comes back with a guilty or innocent verdict, a 17 year old boy, Trayvon Martin, is dead. While it is right to seek after justice, is it possible during the process to miss the point?  Has the media and the populace become so enamored with the trial and the ultimate verdict that Trayvon has been pushed to the side?  Is this the effect of the 24 hour news cycle with its constant updates, critiques and up to the minute details?

Trayvon was brought up during the trial.  But in my view it was more indirectly, as if he was a part of some grand motion picture of the legal system of Florida.  He was described as a thug high on marijuana as well as a 17 year old kid just trying to keep out of the rain and get back home.

What happened that February night was a travesty for all parties involved. No parent should ever have to bury their child and George Zimmerman now has to live the rest of his life knowing that he took another human being’s life.

At the center of the Creation story found in the Book of Genesis is the notion that all of creation is made by the hands of God.  But it is humanity that takes a special place in the order of creation.  God created humanity in God’s likeness and image.  Genesis 1:26-27 reads:

“Then God said, ‘Let us make humanity in our image to resemble us so that they may take charge of the fish of the sea, the birds of the sky, the livestock, all the earth, and all the crawling things on earth. ‘ God created humanity in God’s own image, in the divine image God created them,male and female God created them.” (Common English Bible, 2011)

These two verses serve as a reminder that no human being is an accident and that every human being is a product of a living God. It was God who formed from the dirt Adam and then breathed the very breath of God into his nostrils. These two events are not the by product of a passive God; these events signify that God has an intimate relationship with ALL of humanity, no matter what side of the “train tracks” you are from.

During the next few days (or maybe weeks) we need to remember the story of creation.  As the verdict is returned and the news organizations postulate why the jury went one way or the other, may we remember that all life is precious and all people are children of God.

George Zimmerman, guilty or innocent, is a child of God.

Trayvon Martin, no matter his past or alleged wrong doings, is a child of God.

May we remember where we all come from not just during a high profile case, but forever.