It was a typical Sunday in South Texas for the Dolive crew.  We got up, went to church, worshiped, sang and I preached.  We got into our vehicle and made our way back home.  We have done this cycle numerous times but this one ended with a twist.  We were about 5 minutes down the road when my wife and I hear our daughter saying “hi” to someone.  I noticed a truck trying to pull up next to us and waving frantically.  My first thought was “did I leave something on top of the car?”  or “is this a prank?”; it was neither.  The people in the truck called out “you have a flat” and pointed to my front tire.

This group of people couldn’t have told me at a better time; we were near an exit for a gas station where I confirmed that I indeed had a flat time.  I filled it with air and we made our way back home.  We stopped a few miles down the road and checked the tire again… it was back to its deflated status.  Luckily we were close to the next town where I thought there was a auto parts store or a tire shop or something where we could fix the tire.  (In hindsight I should have just changed it but then again that’s hindsight.)

As we were exiting the interstate I heard the dreaded rumble… the rumble of an extremely flat tire.  I turned into a gas station and I knew what was ahead of me, changing a tire…in a suit… in the heat of Texas.  (By this point it was in the 90s with the Heat Index of about 100… see below).

I’ll admit I have never had the best of luck when changing tires.  Sure I remember the 30 minute video that we all saw in Driver’s Ed but that was like 14 years ago.  On other occasions when I have had to change a tire I could never loosen the lugs to actually change it.

So there I was lugging the tire out of the car, the wife and kids walking to the Dairy Queen next to the gas station and I am already beginning to sweat.  As I am trying to place the jack under the car a gentleman comes up and inquires if I need help.  Emphatically I answer yes.

We get to work on tire… breaking the lugs, jacking the car up, rolling the tire which was coming apart at the seams (literally) and replacing it.  We didn’t say too much to each other.  I don’t even know what his name was, what he did for a living or where he hailed from- all I knew was that he took time out of his day to help me.  In a relatively short amount of time we had changed the tire and as quick as he had arrived, he was gone.

I packed up the old tire and jack and drove out of the gas station and headed for the DQ (that’s Texan speak for Dairy Queen).  My lovely wife had ordered me a meal and I came in and sat down.  I was dripping with sweat, I had road grime on my face (because  I had wiped the sweat away from my dirty hands) and I was thankful for cold A/C.

After a few minutes in the restaurant it dawned on me what had taken place, in some weird way I had experienced a mini Emmaus moment.  (The story in Luke when Christ was walking with two people on the road to Emmaus [a town outside of Jerusalem] after the crucifixion); they didn’t know it was Christ until he was gone.

Questions began to swirl in head:  Had I been touched by grace in the face of a stranger?  Did I not recognize the presence of Christ especially in the man who stopped to help?  I felt bad for not recognizing what was happening in the moment.  Maybe that’s the point of the Emmaus story to remind us that Christ’s presence and essence can be seen and felt in every aspect of life including changing a tire on a hot Sunday afternoon in South East Texas.

Have we missed those moments where God is hitting us over the head by using people to continue the work of God in the world?  Has the church been so focused on bodies, babies and baptisms that we have failed to see the goodness of God outside the four walls of the church?

I talk to people nearly every day about the presence of God in the world.  I speak of how God knows us, cares for us and is abiding with humanity in every time and place.  But as with most things they are easier said than done, sometimes it takes something drastic to get our attention instead of trying to navigate this thing called life alone.

For one to actually contemplate the presence of God in the world is a bit overwhelming; God is present in every aspect of human life– from the trees, to the clouds, the faces of people we interact with each day are all created by the same hands of God.

My only hope is that it doesn’t take another flat tire for me to be aware of the presence of God in my life. 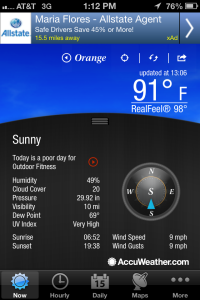