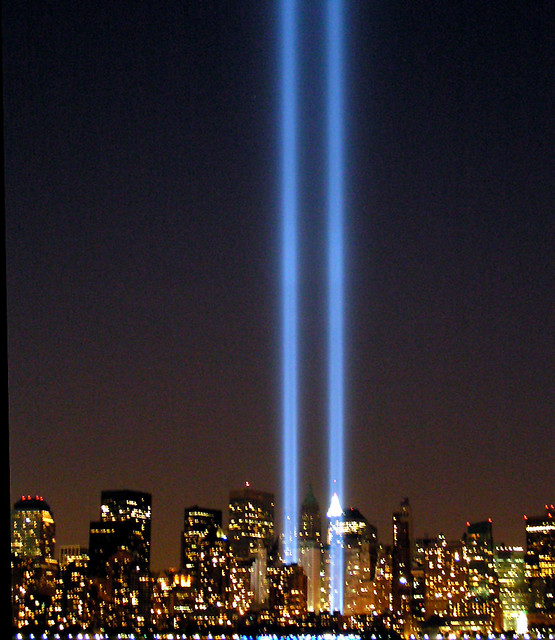 Below is an article I wrote for the Orange County Record. It will be published tomorrow but I thought I would post it today on the anniversary of September 11, 2001.

Yesterday marked the 11th anniversary of the terror attacks that took place across the country on September 11, 2001. On that day nearly 3000 people lost their lives. Every year the country is called to stop and remember those who perished in a senseless act.

Since then the world is a much different place. Wars were fought in remembrance of those who died; soldiers gave their lives defending the freedoms that we have here in this country today. But one of the biggest things that happened because of 9/11 was that Islam was put on the map and under a microscope.

Christians have had a choice to make sense that day: live in fear and hatred of another religion or learn and find way to connect via common ground. Many people, many Christians have made all Muslims the enemy of the United States and even of Christianity itself. This is a tragic outlook for Christians to take; this makes all followers of Christ look bad and it is still happening today.

Since 9/11 a number of anti-Muslim websites, rallies, posts and possibly sermons have taken place. Most of them have been based in the fear, assumptions and thinly veiled truths. The other day I saw a bumper sticker that read “Mohammed is dead, Jesus is Alive!” This got me thinking, would this sticker have ever been produced if 9/11 never happened? Why are some Christians so afraid of this particular religion? Why are debates being held on whether the President of the United States is or is not a Muslim? It is unfortunate that all peaceful Muslims here in this country are lumped into a class of people that advocate to the death of innocent life. Most Christians do not want to lump together with Westboro Baptist. If we do not want to have this done to us, then why are some so quick to do it to others? Where is the grace? Where is the love? Where is the notion that all of humanity is created in the very same image of God that you and I are created in?

Islam has been around for centuries but until 9/11 I really did not know much about the religion. I knew that Islam’s holy book was called the Koran, followers of Islam or Muslims had a very strict prayer life and their prophet was named Mohammed. That was it- like many I was pretty limited on my understanding of this particular religion. Some have still not taken the time to learn more or get to know their fellow Muslim neighbor. Protests and rallies are held across this country to stop the building of mosques. Remember the big uproar that was caused when an Islam Center was going to be built near where the World Trade Centers once stood? People who were against the mosque cited that it was because of Islam that the towers fell. This is a poor analogy. If that is the case then across Europe there should be no new churches because of the atrocities of the Crusades.

When I was in seminary in Kentucky I took a World Religions course. As part of the requirement I had to visit various centers of worship across different religions. Next door to the seminary was an Islamic center. The class was invited to visit the center and witness daily prayer. After the prayer session I was able to speak to the Imam about Islam and the center itself. One of the questions I asked was “Since 9/11 how have you seen a change in the way you are treated here in Kentucky?” The Imam stated that he wished that more people understood that the terrorists did not follow what was written in the Koran and that not all Muslims acted the way they acted. He followed that up and said, “Never before have I ever had to defend my faith.”

This country was founded on the notion of religious liberty and freedom. Christians are called to be the hands and feet of God in the world at all times and to all people even those of other religions.

September 11, 2001 was one of the worst acts of violence ever enacted and we should remember those who lost their lives. But making all of Islam the villain of freedom and Christianity is wrong.